And the winner is…………………..Charlly! Charlly correctly guessed three out of eight right! Not bad. The correct answers are…..

The prize for this contest is a digital copy of the Elgen Guard General Handbook which should help prepare you for our next book club book Michael Vey: Prisoner of Cell 25! Plus all the Valentines! Charlly, please contact me on what E-book format you would like your prize to be (Amazon or iBooks)

Last year, I hosted my first contest EVER on the blog, and if you’ve been following you might have noticed I haven’t hosted one since. It was a lot harder than I expected it to be and I was a little reluctant to do it again this year, but I had a lot of fun writing making the Valentines and I want to give contests another go…so we’re doing a contest again this year! Only this time, this contest won’t be in anticipation of Valentine’s Day! If you haven’t read All I Want For Christmas Part 3, you’ll probably be very confused!

Contest Info: Valentine’s Day has come and gone, but love is still in the air at Willowfield Falls. Vera, Jordan, Phoebe, and Amelia all received two unsigned Valentine’s this holiday. One sweet Valentine and one prank Valentine. The girls have complied a list of possible senders to each girl. Can you figure out who likes who and who the prankster (or pranksters) is?

Rules: I promise that this contest will be easier than the last one. This time there is a four person sender bank for each girl and you must chose you’re answer from that bank. Your answer should be commented like this: Harry gave Mary Valentine 1 and Frank gave Mary Valentine 2. Whoever gets the most right first wins the contest. The contest closes on Friday, February 21, 2014 and I will announce the winner and PRIZE on Friday, February 28, 2014. Good luck! 🙂

For the sweetest, bestest Valentine in the world

I tried to find one online

But the words weren’t mind

I tried to buy one in the store

But they always said too much more

I’ll keep it simple and sweet 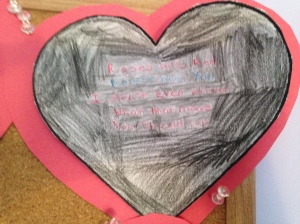 I don’t even know what that means

But you don’t make me sweat in my socks 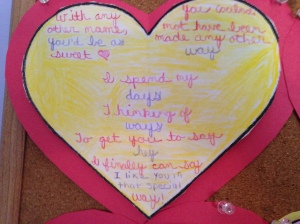 With any other name, you’d be as sweet

You could not have been made any other way

I spend my days thinking of ways to get you to say hey.

I finally can say. “I like you in that special way!” 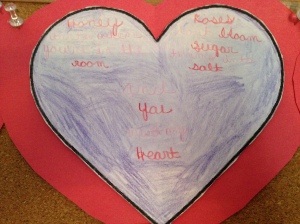 Honey tarts when you’re in the room

and you melt my heart. 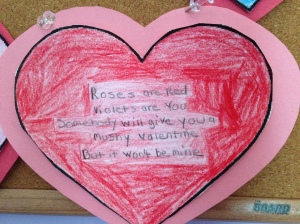 Somebody will give you a mushy Valentine

But it won’t be mine

I must be a fool

Because I’m bound to get a smack from you 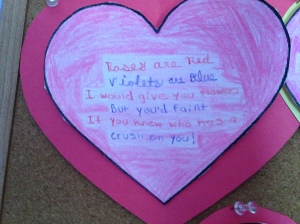 I would give you flowers

But you’d faint, if you knew who has a crush on you!

If you’re a little bit confused, I’d suggest you wait until I finish All I Want For Christmas (which will hopefully be before the 21!) 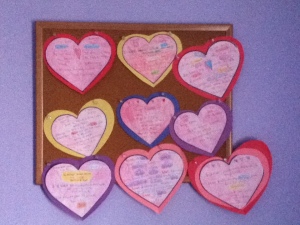 And the winner is………….Charlotte! Charlotte got all the Valentine’s right. Did you? The winning answer was:

a is from emily to nelson, b is from jaci to timmy, c is from abby to zach, d is from natalie to darcy, e is from virgina to leo, f is from timmy to jaci, g is from nelson to emily, g2 is from darcy to natalie, h is from leo to virgina, i is from zach to abby

The prize for this contest is a hardback copy of the Jan/Feb book Close to Famous and all the Valentines!

First I would like to apologize. I didn’t know how hard this contest would be. So, I’ve decided to give out hints!

Also the person who sent the Valentine they receive, they sent a Valentine to. The original post can be found here. Please contact me if the contest is still too hard. The winner and PRIZE will be annouced on Valentine’s Day! Good Luck!

Valentine’s Day is coming soon and I decided that this is the perfect time to have our first ever contest!

Contest Info:Valentine’s Day is about two weeks away and love is in the air in Florida, Massachusetts! But a couple of people are too afraid to tell their feelings to the person they like so they sent anonymous Valentines! Who likes who? Its up to you to find out!

So what you have to do is figure out who sent the Valentine and to who. Comment your answers but chose wisely you only get one chance! It should look like this: Valentine X was given to Blank from Blank.

All of the Valentines! 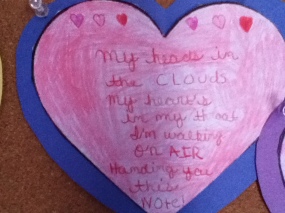 My heads in the clouds

My heart’s in my throat

Handing you this note!

Love does not envy or boast.

Love is not arrogant or rude.

Not irritable or resentful.

Love does not insist on its own way.

Love is kind so be my Valentine!

Take all my love.

Take all my kisses.

But there better be a ring.

If you want me to be your Mrs.!

I have just one Valentine’s Day wish.

That you’ll be my Darcy and I’ll be your Elizabeth!

So what do you say?

Will you make my Valentine’s Day?

I never know what to say around you!

I’d like to convince myself there’s no one left to ask.

But the truth is I only want you!

I know its soon.

But I think I’m in love with you!

There is no fear in love, but perfect love cast out fear.

So I’m just going to say it.

Please be my Valentine till the end of time!

I’ve crushed on you.

So here’s my heart.

And here’s my soul.

I think its time you should know.

Could you think of me? 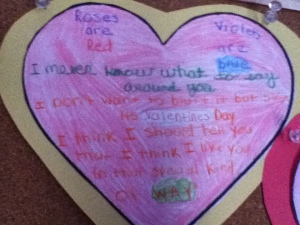 I never know what to say around you!

I don’t want to blurt it but since its Valentine’s Day.

I think I should tell you that I like you in that special kind of way! 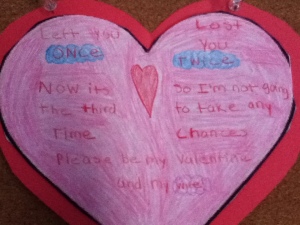 Now its the third time.

So I’m not going to take any chances.

Please be my Valentine and my wife.

Who ever gets them all right (or gets the most right) wins the contest! I will announce the winner and PRIZE on Valentine’s Day! Good Luck!